Yet again, the ping pong balls didn’t work in the Detroit Pistons’ favor.

Although they entered Thursday’s NBA Draft Lottery with the fifth-best odds of getting the No. 1 overall pick in the Oct. 16 draft, the Pistons fell two spots to seventh. The Minnesota Timberwolves will pick first, the Golden State Warriors second and Charlotte Hornets third. 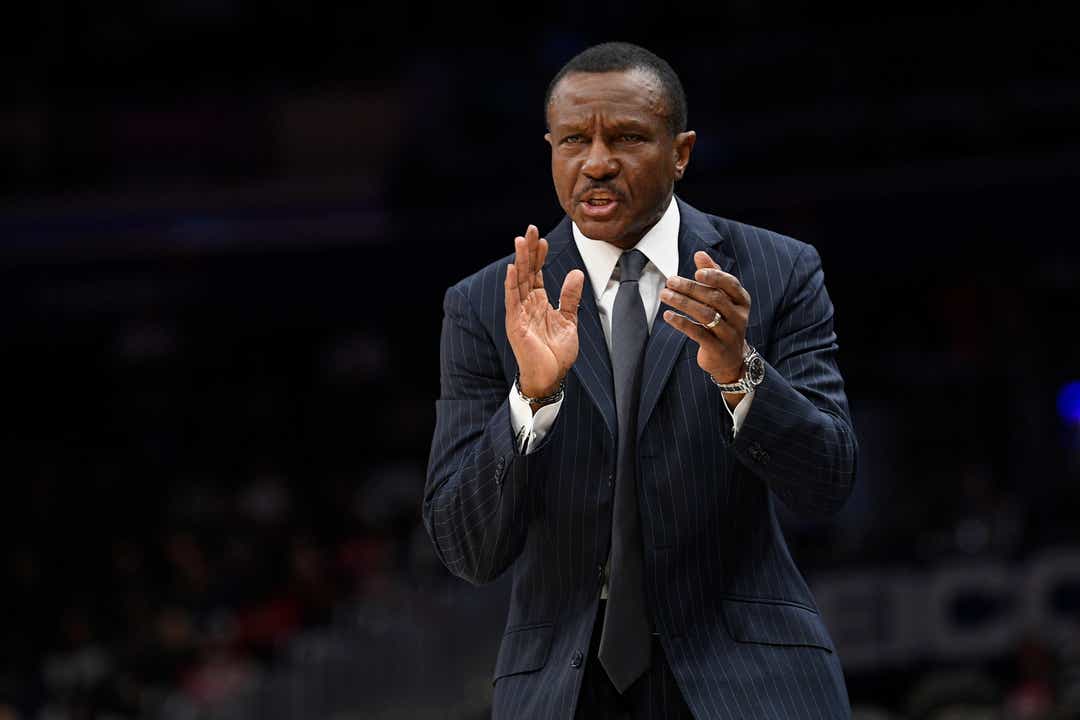 The Pistons’ odds of getting the top pick were 10.5 percent after they finished the season at 20-46 when the league suspended the season on March 11. They were a half-game from moving into one of the bottom three, which would have guaranteed odds of 12.5 percent at the No. 1 selection.

It wasn’t mean to be. The Hornets moved up five spots to leapfrog the Pistons into third and the Chicago Bulls jumped three spots to pick fourth. That dropped the Cleveland Cavaliers three spots and the Atlanta Hawks and Pistons two spots each.

Pistons general manager Troy Weaver, who was hired in June, will lead the Pistons’ draft effort. He’s optimistic about the chances of landing a good player, despite falling down a couple of spots.

“I believe seven is a great number. Not to get too biblical, but it’s a great number in the Bible, and it has great meaning, and hopefully, the seventh pick will bring us good fortune as well,” general manager Troy Weaver said Thursday night via teleconference. “We’ll continue to do our work for the draft, combing over every prospect, every scenario and coming to a decision.”

The Pistons moved down two spots and into likely out of position to get one of the top prospects in the draft: point guard LaMelo Ball, wing Anthony Edwards or center James Wiseman.

Weaver sees significant depth in the draft and although there is no consensus No. 1 pick, the Pistons can get a player who could fit the rotation at their spot.

“I always felt like this draft was about 14 or 15 deep. I felt like you could probably get the (same-quality) player between 3 and 13, so hopefully, we will have the good fortune of getting someone of that stature with the seventh pick,” Weaver said. “We don’t feel sorry for ourselves; we pick up the ball where it is. We’re excited for this opportunity and we will make the most of it.”

Since the NBA moved to a lottery format in 1985 to determine the order of the first picks, the Pistons had gone 0-for-13 in their attempts to move up. In five of those cases, they got a lower pick than their spot entering the lottery.

The seventh pick is the highest for the Pistons they selected since Greg Monroe seventh in 2010. Their ill-fated selection of Darko Milicic with the No. 2 pick in 2003 was the Vancouver Grizzlies’ pick, which they got in a trade. Their previous high in the lottery era was the third pick in 1994, which yielded Grant Hill.

More: ‘Exciting time’ for Pistons, wherever they land in NBA Draft Lottery

The draft pick is a significant piece of the Pistons’ rebuilding plans, with new general manager Troy Weaver taking the reins in June. The Pistons will have significant space in the salary cap for the first time in several years and traded away many of their veterans, in an effort to give more playing time to their young players.

Point guard looks to be the biggest position of need and this draft class is regarded as having good depth at the position.

“It’s a very deep point guard draft. I won’t get into specifics but at every (drafting) level, there’s a point guard. Where we are — and I agree with what Troy and Ed have talked about — it’s best player available,” coach Dwane Casey said Wednesday via teleconference. “If it is a point guard, we’ll take it; if it’s not, we’ll take that (best) player also, wherever we end up in the lottery.”

Despite the bad luck that Detroit’s pro teams have had in the lottery — dropping from the first position to fourth in the NHL draft — Weaver didn’t want to lean on the conspiracy theories or the idea that Detroit teams are cursed when it comes to the draft lottery.

“Before everybody starts with the ‘Woe is me,’ don’t do that with us,” Weaver said. “We’re not built that way. We’re going to charge forward and get after it for the seventh pick.”